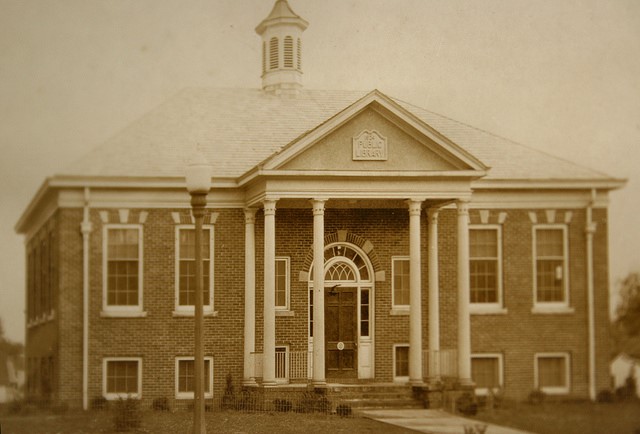 The Museum will be open for the 2021 Season from May 1 through October 30.

To keep the COVID-19 virus from spreading, all staff and ALL VISITORS ARE REQUIRED TO WEAR MASKS while viewing exhibits. Interactive aspects of displays have been removed and a maximum number of visitors has been set to promote social distancing.

Admittance to the Museum is free and there is no charge for most Museum sponsored activities. Cash donations are accepted and always greatly appreciated. All donations will be used for preservation of the collection and educational programming.

Private Tours of the Museum

Museum tours for families and small groups are available by appointment only. If you would like to make an appoint, make a research request or donate an artifact, please call 608-825-0837 or send us an email.

Added to the National Register of Historic Places in 2010, this 1924 red brick building is located at 115 E. Main Street in downtown Sun Prairie. The building was designed by Alvin E. Small who was born in Sun Prairie in 1869. He attended school in Sun Prairie and became a well-known architect in Madison, responsible for designing many prairie-style homes and several Madison buildings.

Originally designed as a Public Library, established in 1927, this building was constructed on the land occupied by the original Bird family homestead. Now serving the community as the municipal Historical Museum, past uses of this building include City Offices, Village Council Chambers, the original site of the Colonial Club Senior Center, and for a short time served as a World War II Red Cross Center where volunteers rolled bandages and donated blood.

In the summer of 2018 the Museum’s windows were blown out and walls were cracked from the gas explosion one block away. All items in the Museum’s collection needed to be removed and stored off-site so some major renovations could take place. Over the next year and a half new UV windows were installed, wall-to-wall carpet was removed and the wood floors were restored, a new wheelchair lift and ADA restroom were installed and the walls were re-plastered.