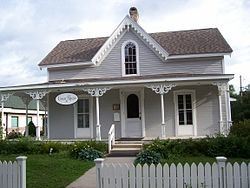 The 1850s and the Crosse House

The Crosse home could date from the early 1850s after Ellen and Patrick Doyle purchased the property from Charles H. Bird on March 27, 1850 and constructed three houses next to Doyle’s blacksmith shop.  Either Doyle’s house was moved or destroyed, or the front section of the Crosse House is one of Doyle’s houses.  In the 1850s according to local tradition a large room was added to the back of Doyle’s house.  This room was used as a private school for one year.  This private school according to tradition and the 20th Century Scrapbook became the Baptist Academy also known as the Seminary.   We know from research in original sources that the Seminary existed in 1853 at the Flat Iron Point site.  If tradition is correct use of Patrick Doyle’s house as a school took place in 1852.

Where did the Crosse family live when the family arrived in Sun Prairie?  According to the 1860 tax assessment of the Town of Sun Prairie, the Crosse family lived in Section 5 of the Town of Sun Prairie, west of South Street.   The “structure” was valued at $120.00 with Dr. Crosse’s personal property valued at $320.00.  He also owned thirty-six acres.  South Street was named in 1868.  In 1860 it was probably just called The Lane.  The legend is that Dr. Crosse only had ten dollars to his name when he came to Sun Prairie.  This doesn’t quite fit the fact that he owned thirty-six acres.

Dr. Crosse’s personal property was listed as $730.00 in the 1864 Town of Sun Prairie Assessment records.

In 1866 the place of residence was in section 5 with the residence worth $315.00.  The assessment was completed by July 2, 1866.  This is the last record from the Township of Sun Prairie currently available to the Museum.

In 1866 Rowena Crosse purchased the property from David B. Turnbull and wife.  Rowena and Dr. Charles G. Crosse remodeled an existing home in the Gothic style or constructed a new house.  Major additions to the house date from the 1870's since newspapers from the 1870s were used as insulation.  The tax records from the early 1870s also show an increase in taxes on the property that was not reflected in other homes.

Organization of the Village of Sun Prairie in 1868

The village of Sun Prairie plat map was recorded on December 8, 1868 with L. P. Drake as the surveyor.  The survey was completed on Nov. 20, 1868.   The newly formed village officials signed off on the survey map on December 4, 1868.  The 1868 Treasurer’s Receipts have Dr. Crosse as the owner of property in Block 8 and lot 2 in block 10.  Dr. Crosse was also in a partnership with Spencer.  No details were given in the records.

The firm of Crosse and Lewis property was valued at $580.00.  The building was located at Lot 12 of Block 10, located at the southwest corner of Market Street and East Main

The Countryman was not printed in the Crosse House.   Printing was noisy and dirty work.   Why print a paper in the house when a business site provided for printing stationary, etc.? C. G. Crosse already operated a print shop in an earlier store building, which was located at Lot 12, Block 10 as late as the 1883 Assessment Roll.  Dr. Crosse provided stationary for the village government in the 1870s.

1885 Assessment Roll and the New Crosse Pharmacy, The Countryman & Store

The Assessment Roll for 1885 has Carlos Jones as owning Lot 12 of Block 10.  It was no longer the office of Crosse & Son.   Dr. Crosse was the new owner of Block 6 and lot 9 with an assessed value of $2,000.00. This is the existing building on the northwest corner of North Bristol Street and East Main Street.   Theodore Crosse was listed as owning the property where he constructed his home on Block 6.  It is important to know where Dr. Crosse and his family lived and worked.

The Crosse House was rented out as a residence for many years.  Two of the families that lived in the Crosse House were the Wenzel Schuster family and the Francis Sheehan Family.  I’ve never developed the full history of the rental property.

Crosse House as a Commercial Property

Sale of Voelker Property to City of Sun Prairie

Leslie sold the property to the City of Sun Prairie; the land contract is dated September 16, 1973. The property was purchased as an expansion site for the Water and Light Commission.  The contract specified that Leslie could continue to live in the house located at 128 Lane Street.  The city had a right of possession on the property if Leslie left the home for more than one year or if the house was destroyed.  Leslie died in 1974.

Sun Prairie Historical Restorations organized on August 9, 1976 (Bylaws are from October 13, 1976) to preserve the Crosse House.  Miriam Semmann was the president and Charmaine M. O’Brien was the secretary of the initial board.

The first time the issue went to the City Council, Peter Klein was asked to attend by Sun Prairie Historical Restorations.  My ultimate advice to the council and to Dale Davis was that the City Council should decide the future of the Crosse House.  Dale Davis later told Peter Klein that he (Davis) appreciated Klein’s support of the Council as the governing body of the city.

Chamber of Commerce and Historical Restorations

The Chamber of Commerce rented the front office formerly used by Dr. Baldwin as their office under Carolyn Rusk. I don’t have the actual dates of the rental available at this time.

The dedication ceremony of the Landmark Plaque awarded by the National Register of Historic Places to the Crosse House took place on October 16, 1993.  The speakers included Nancy McMahon, Peter Klein, JoAnn Orfan, and Ellen and Darwin Virchow.

Over the past 20 years, the Crosse House has been used for school tours, educational events, fundraisers for restoration, recognition events, historical presentations, Georgia O'Keeffe teas, as well as being a meeting place for the Sun Prairie Historical Restorations and the Sun Prairie Historical Society. COVID-19 made 2020 - 2021 challenging by limiting the number of people allowed in the house, so school tours and other events had to be cancelled. Hopefully, the House will continue to be an historical attraction for visitors to Sun Prairie.