What is Earth Day?

Earth Day originated in 1970 as a dedicated day of education and engagement about environmental issues. It takes place annually on April 22 and is observed in a variety of ways depending on the organization or community recognizing it.

One of the major catalysts that caused Americans to become concerned about the environment in the early 1960s was Rachel Carson's 1962 bestselling book Silent Spring. This book highlighted the negative impacts of pesticides on the American countryside. Furthering public concern was the 1969 fire on Cleveland's Cuyahoga River. This was a fire on the Cuyahoga River that was caused by an accumulation of debris and oily wastes. The floating pieces of oil slicked debris had been ignited on the river by sparks from a passing train. Prior to occurrences like these, protecting and preserving the earth's natural resources were not considered major priorities. It was common for pollutants found in the lakes, rivers, and air to come from nearby factories with minimal legal consequences. The number of activists devoted to addressing these issues were very limited. Things began to change due to the efforts of a former Wisconsin senator.

Gaylord Nelson, a Wisconsin Democratic junior senator, was concerned about the environment and its deteriorating state in the U.S. In 1969, the massive oil spill in Santa Barbara, California was witnessed by him and others. This signaled a major wakeup call for change. Nelson was inspired to initiate this change and determined to persuade the federal government about the existing environmental risks the nation faced. He developed the idea of "Earth Day" (inspiration also came from the anti-Vietnam "teach-ins" taking place around college campuses in the U.S.). Nelson carried this idea to a Seattle conference with the intention of getting many others across the nation on board with it. It's reported that he received an enthusiastic response that spread beyond just attendees at the conference.

Denis Hayes, a young activist from Stanford University, served as Earth Day's first national coordinator. He collaborated with student volunteers and staff members from Nelson's Senate office to organize and carry out the initiative. The first Earth Day took place on April 22 in 1970. Many locations across the U.S. observed this day in different ways that included political speakers, city center rallies, concerts, and more. Since this time, Earth Day events have evolved and changed over the years.

Many more communities have used this time to organize park cleanups, fundraise for different environmentally friendly initiatives, embed sustainable practices into the community, and more. In the 1990s, recognition of this day surpassed North American borders with over 140 nations beginning to place activities and events to celebrate the cause.

To learn more about different Earth Day news and events around the world, please go to earthday.org

Earth Day is annually held on April 22 to demonstrate and promote environmental awareness through a variety of different efforts and initiatives. In Sun Prairie, we will be turning this day into a month that is filled with a variety of pledges, initiatives, and community activities. We have provided many opportunities to not only protect and preserve our area but also build community while doing this work. Check out below everything we have planned!

Volunteers are needed to help conduct a clean sweep of the Sun Prairie Parks for Earth Day on Saturday April 23, 2022. Sign up to help at a park, or even two! Bags will be available during the event kickoff at 9:00am at Sheehan Park West (Across from the library). Bring your own gloves, water bottle, sun screen, bug spray, etc. If you're signing up a group or organization, please include the group names. If you email a group logo to admin@parksfriends.org, we'll post your group as a partner on the event website.

Join us for our annual Dog Park cleanup! A volunteer leader will be near the entrance of the dog park below to help get you started. If possible, bring gloves, 5-gallon pail and a scooper.  We will have some supplies on hand. 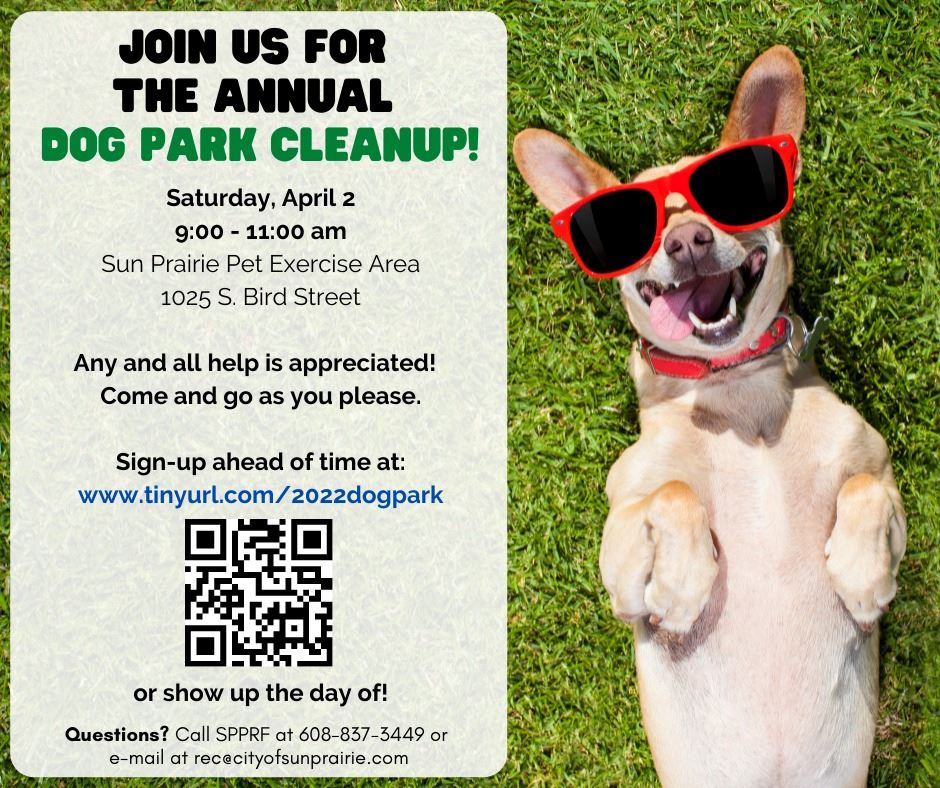 A free informational training session will be offered from 8:30-9:30am on how to identify invasive plants and properly remove and dispose of them. Volunteers can apply their training and help with invasive plant removal at the park from 9:30am-Noon.